The characterization of charge and energy transport in large multicomponent assemblies is a challenging problem. Transport depends upon the macromolecular structure, which in turn depends upon the scaffold and the chemical structure of the monomer. The separation between adjacent components is described not by a single distance but rather by a distribution of distances that results in a distribution of electron and energy transfer rates.  We use transient absorption and emission spectroscopies to characterize the excited state dynamics in assemblies consisting of 20-70 chromophores. Large-scale computer simulations provide insight into fundamental dynamics of transport. These project involve partnerships with groups that are experts in the synthesis of molecular assemblies based on polymer (Meyer, Schanze, Reynolds) and peptide (Waters) scaffolds .

Solar fuels generation requires molecular assemblies that can perform multiple functions. In collaboration with the Schanze and Reynolds groups, we have examined the excited state dynamics of a functionalized polyfluorene polymer anchored to TiO2. The evolution of the transient spectra are followed across 8 decades of time, revealing that photexcitation of the Ru(II) complexes is followed by site-to-site energy transport, electron injection, and ultimately the transfer of the oxidative equivalent to the polymer backbone. The resulting charge separated state lives for about 100 usec. <Read>

A Raman-pump frequency modulation scheme and an automated signal-processing algorithm were developed for improved collection of time-resolved FSRS spectra. Together, these two advancements remove the broad background signals endemic to FSRS measurements and retrieve signals with high sensitivity. This FM-FSRS method was applied to the characterization of ultrafast energy transport in a OPE-TBT copolymer. Ultrafast energy transfer is monitored by the decay of donor vibrational modes and simultaneous growth of acceptor modes. <Read> 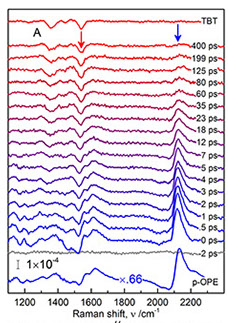 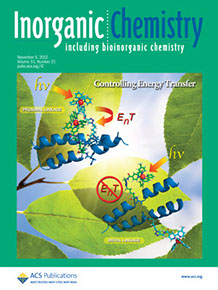 In collaboration with the Waters group, we have examined energy transfer in a coiled-coiled peptide dimer functionalized with a Ru(II) donor and and Os(II) acceptor. <Read> 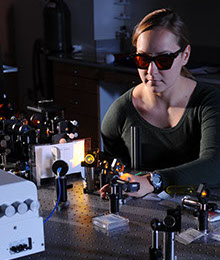 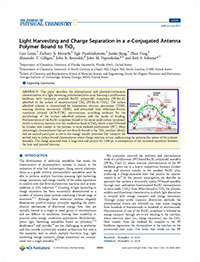 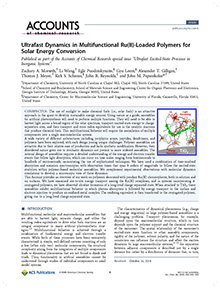 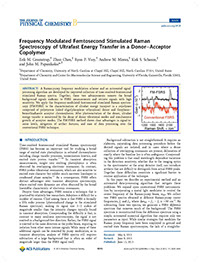 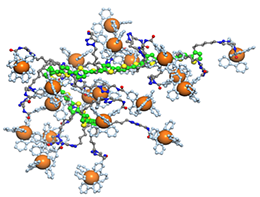