EHP recombination dominates at the end of the wire. <Read>

Finite-difference frequency domain (FDFD) simulations show the optical resonator modes have a high degree of standing-wave character near the end of the rod with a majority of the optical field intensity in the core. By contrast, the interior of the rod with larger cross-section predominately supports whispering gallery modes that produce an optical field located near the surface. The photoexcited carrier density mirrors the optical field distribution, and thus, in the larger sections carriers are localized close to the surface where band-bending effects can separate the electrons from the holes and result in a greater degree of trap recombination. Conversely, excitation near the end of the rod produces carriers in the core, and band-edge mechanisms with faster recombination rates dominate. <Read> 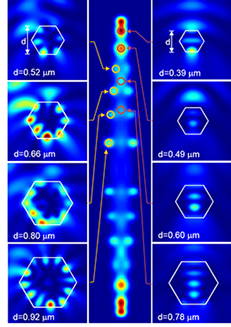 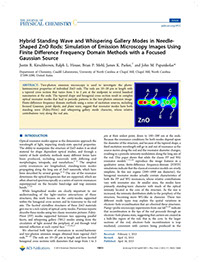 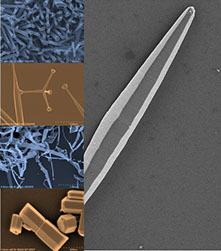 Zinc Oxide (ZnO) is a wide bandgap semiconductor that can be grown in a variety of nanoscale morphologies (e.g. rods, ribbons, tetrapods). We  have used a combination of two-photon emission microscopy, time-resolved photoluminescence microscopy, and pump-probe microscopy to study electron-hole recombination in tapered ZnO nanorods.   The nanorods, which are comparable in size to the wavelength of light, support complex optical resonator modes in the hexagonal cross section of the structure. FDFD simulation suggest that these resonator modes play an integral role in the electronic dynamics, even determining the relative partitioning between trap and band-edge recombination. 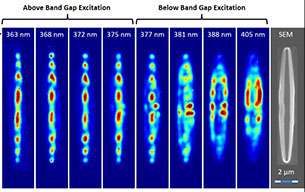 The high spatial resolution of pump-probe microscopy revealed that the recombination dynamics at the end of the rod differ dramatically from those observed at the interior, with the ends showing faster electron-hole recombination rates than any other point in the structure.  Spatial variation is particularly apparent in images obtained by fixing the pump-probe delay and monitoring the transient signal as a function of position (see animation at right).  At early delays the largest signal (dark red) is at the end of the rod.  At longer delays, this spot diminishes, and eventually disappearing altogether, while the signal in the interior remains. The spatial variation reflects different decay pathways with carriers at the end recombining through an electron-hole plasma (EHP) mechanism, while the interior sections are dominated by trapping. This result is particularly surprising since the defect density at the end of rod is expected to be higher than that in the more faceted interior sections. The origin of this counterintuitive effect stems from a spatial variation in the whispering gallery mode character in the resonator modes along the rod axis.

Electron-Hole Recombination in Needle-Shaped ZnO Nanorods: The End is Different than the Middle 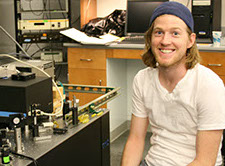 Second harmonic images of these tapered ZnO structures suggest the presence of complex optical resonator modes supported within the cross section.  Images show areas of enhanced second harmonic intensity along the longitudinal axis of the rod that are periodically distributed. The spatial modulation is a consequence of the optical field coupling into standing wave resonator modes between paralle facets. Computer simulations incorporating SEM structural data confirm the mode assignment. The more complicated  image observed with below band-gap excitation arises from whispering gallery modes, where light propagates around the periphery of the structure through total internal reflection. <Read>